For recent journal prompts, please visit my new website at www.JournalingWithJenny.com or contact me at journalingwithjenny@gmail.com to request Sunday Journal Prompts by email. 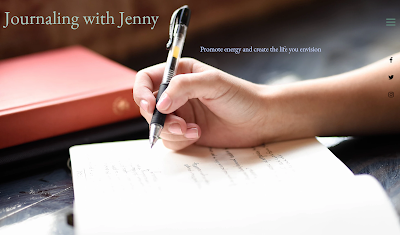 “When everything seems to be going against you, remember that the airplane takes off against the wind, not with it.”


It’s been a rough month for me. I thought I had shin splints in both legs but then the pain got so bad I couldn’t walk without crying. I crawled around the house and, when that got too painful, my husband and sons carried me. I’ve seen several doctors, had a battery of tests and am now being treated for an autoimmune issue that affects the lower legs of some people with Crohn’s disease, particularly women.

I reduced my schedule at work, have postponed my freelance projects and cut back socializing. Robert moved the boys back to their college dorms without me, which was hard for me to miss since I love doing that.

Experience has taught me that journaling most helps me during times of uncertainty, fear and pain, yet it wasn’t until today that I returned to it. While I started out writing about my exhaustion and despair, I ended my journaling session feeling grateful for my support system, a team of family and friends who drive me to work and medical appointments and who offer me encouragement.

What most helps you during difficult times? How can you remind yourself to return to what strengthens you? 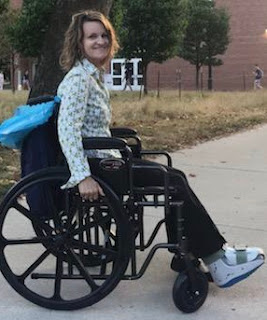 “The greatest thing in the world is to know how to belong to oneself.”


As much as I love and enjoy my family and friends, I treasure my time alone—a chance to think, plan, write and reflect. Spending time alone allows us to re-center ourselves amid life’s commotion, to truly know ourselves.

My friend Jackie shared this photo from her solo kayaking trip, an opportunity for her to reconnect with herself and with nature. I saved this image to my phone weeks ago and find myself returning to it often, as it reminds me of the peace and beauty of my own solo adventures.

What solo adventure can you plan for yourself? 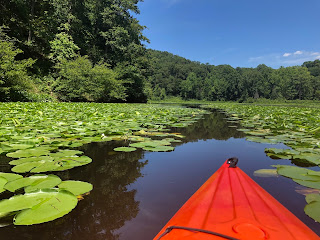 
As part of a research project about journaling, I’ve been conducting university workshops and collecting surveys for three years. From about fifty workshops, I’ve gathered nearly one thousand responses, far more than I needed. I’d started an article about the project a few years ago, but didn’t finish it since sifting through all the data seemed overwhelming. Rather than facing the pile of surveys I already had, it was easier to keep saying “yes” to requests for workshops, which of course added to my pile of data.

The task seemed crushing, but, as I discovered this week, not doing the project drained me far more than the three days it took to sort and enter my findings. I still have work to do: analyzing my findings, writing the article, finding an academic journal that will publish it. But it feels good to have taken a crucial step toward a goal I set for myself over three years ago.

What seems impossible? What’s a first step you can take toward it this week? 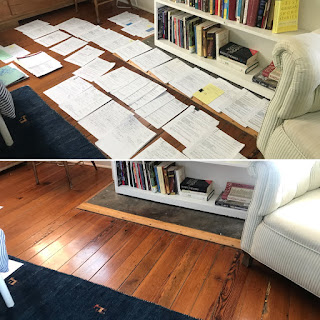 “We generate fears while we sit. We overcome them by action.”


Today marks the first day of a ten-day writing residency I’m blessed to have: time away from my job and other responsibilities—every writer’s dream. Yet I’m filled with fear. What if I spend too much time reading, walking, napping or chatting with the other writers? What if I take too long to get started? What if what I write isn’t any good? What if I don’t accomplish what I plan to do?

Worrying robs me of my energy that could be better put into action. I’ve been here before—literally and figuratively. As beautiful as the road ahead is, it’s a long road. By getting started and developing a routine—one that includes writing, reading, walking, napping and socializing—I get into a groove. In my case, the first step is to open my laptop and put one word after another.

What action can you take to dispel fear? 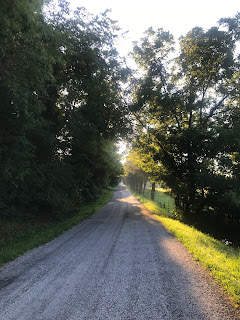 “The past is never dead. It's not even past.”


I spent a recent weekend in New Orleans, enjoying time with my brother and his family and seeing his daughters perform in a play. A friend drove me by a duplex apartment where I lived for a year during my college days nearly thirty years ago.

A rush of not just memories but voices returned—those of my two roommates on the first floor and those of the three boys who lived upstairs, mostly voices I hadn’t heard in decades. With this oddly present echo from the past, Faulkner’s quote about the past never dying resonated.

Lately I’ve been obsessed with time-travel narratives—such as Netflix’s Dark and Octavia Butler’s Kindred—and have been thinking about how time, which I often think of as a constant, seems to speed up or slow down. “Time is an illusion,” according to Albert Einstein, which makes me wonder if our perception of time may differ from reality.

What does the concept of time mean to you? Have you ever thought of it differently? 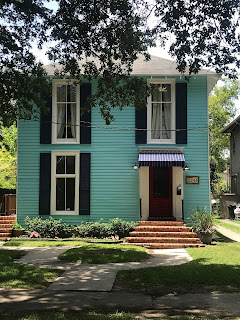 “A library is a place of safety, a haven from the world.”

This week my son and I needed to complete an errand in a town an hour away from home. Upon our arrival, a rottweiler named Rambo barked at and chased Alex in the parking lot beside a truck with the license plate “Monster.” Later the store owner insulted me. Though he quickly apologized, a simple task had turned into a stressful afternoon.

Fortunately, we found a haven. While walking around the town, we discovered a small but beautiful library with a window-seat reading nook that helped restore our sense of peace and equilibrium. Even when I look at the photo, I find myself breathing more deeply.

What’s a haven in your life from daily stressors? 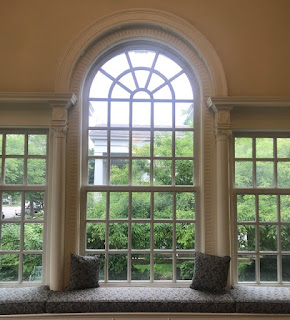 Jenny
When I was seven, I made my own journal out of legal pad paper—a little book that sparked a lifelong passion for writing down my thoughts, feelings and desires. E. M. Forster asks, “How do I know what I think until I see what I say?” Here’s my take: “How do I know who I am until I see what I think?” Journal writing has been proven to combat stress and help treat eating disorders, depression, addiction and other psychologically rooted problems. People who write about past traumas show stronger immune systems. After my mom died, my Crohn’s disease flared up and I dropped to ninety pounds, unable to digest food normally. I made mistakes at work, snapped at my children and avoided my friends. I wanted to curl up in a ball and stay in bed. But each winter morning, I lit a candle, practiced yoga and wrote in my journal. Soon I renewed my friendships, enrolled in graduate school and embarked on a new career. Years later, my morning journal-writing practice still fuels my days. Each prompt is designed as a launching pad to help you learn more about yourself and become the person you want to be. To receive prompts by email, contact Patton.220@osu.edu or @JournalWJenny.